Often known as “the sport of kings”, Real tennis has a rich and colourful history. The sport, which is still active today has a cult following with new venues opening.

Let’s explore Real Tennis together. We’ll look at the history of the sport, the rules of the game, and also the equipment used. While you will see all of the hallmarks of lawn tennis, the game, rules and court are different. So playing Real Tennis provide it’s own unique challenges.

So where did it all start?

The Greeks and the Romans and possibly even earlier civilisations played handball. Or as it was known by its French name, jeu de paume. While there’s no record as to when they started, it’s safe to assume that handball is the precursor to all modern day racket sports.

As the Roman empire expanded into France, it’s believed that the soldier, brought the handball game with them and started to use any walls they could find to play against. Whether that a castle, a monastery or just a random village building.

The word tennis is believed to derive from the Anglo-Norman word tenetz, which means “take heed!” or “Take this! Play!”.

From the 12 century, Real tennis began to spread across Europe. By the times of the Papal Legate in 1596, it is reported that there were 250 courts in Paris alone.

The Church’s stamp of approval

While the game is extricable linked with Royalty, as we will explore shortly, it was first a game of the Prelates, Abbots and minor clergy. As the game was a known favourite with the ruling class of the church, in certain provincial towns in France, the bishop of the diocese received a tithe of tennis balls on Easter Day.

Royalty has been linked to the sport since 15th century with Henry V and later Henry VIII, both playing. In the 16th century, Henry VII built a court at Hampton Court Palace, which is still used today. His second wife Anne Boleyn was watching a game of real tennis when she was arrested. It is also believed that Henry was playing tennis when news of her execution reached him.

During the reign of James I (1603–25), there were 14 courts in London alone. And it is said that Queen Elizabeth I was a keen spectator of the game.

The untimely death of Frederick Prince of Wales in 1751 was due, according to that inveterate gossip, Horace Walpole, to a “blow upon the stomach from a tennis-ball” – one of a number of royal casualties resulting from tennis.

Meanwhile, across the channel, in France, François I (1515–47) was an enthusiastic player and promoter of real tennis. He encouraged all to play and built court to enable this.

His successor, Henry II (1547–59), was also an excellent player and continued the royal French tradition. King Charles IX granted a constitution to the Corporation of Tennis Professionals in 1571. This created a career for the ‘maître paumiers’ and, establishing three levels of professionals – apprentice, associate, and master.

The first rules of tennis ever published- Hulpeau’s Ordonnance du Royal et honourable Jeu de la Paulme, Paris, 1592. The manual began ”You gentlemen who desire to strive with another at tennis must play for the recreation of the body and the delectation of the mind, and must not indulge in swearing or in blasphemy against the name of God”.

The game thrived among the 17th-century nobility in France, Spain, Italy, the Netherlands, and the Habsburg Empire. However, it suffered under English Puritanism, as it was heavily associated with gambling. During the 18th century and early 19th century, as real tennis declined, new racquets sports emerged in England including lawn tennis and squash.

In Victorian England, real tennis had a revival. However, this was short lived and public interest later shifted to the new, much less difficult outdoor game of lawn tennis. This sport soon became the more popular racket sport. Lawn tennis also had another advantage. It’s a game played by both genders, whereas real tennis players were almost exclusively male.

Today, there are around 43 surviving Real Tennis courts across the globe.

While the French Revolution in 1789 brought an abrupt end to real tennis throughout France, there are now only two active courts. One is in Paris built in 1919, and the other is in Fontainebleau (1702).

The sport has the longest line of consecutive world champions of any sport in the world, dating from 1760.

The rules differ lawn tennis, however both games score the same way.

To win a game a player needs to win four points. And, usually (but not if playing off a handicap adjustment), to be at least two points ahead of his opponent. The first player to win six games wins the set. However, sometimes sets are played as first to 8 or 9 games. It is not necessary to be ahead by two games as the eleventh game is decisive (or the 15th /17th). It is the score of the player who won the last point that is called first (this is different to lawn tennis). 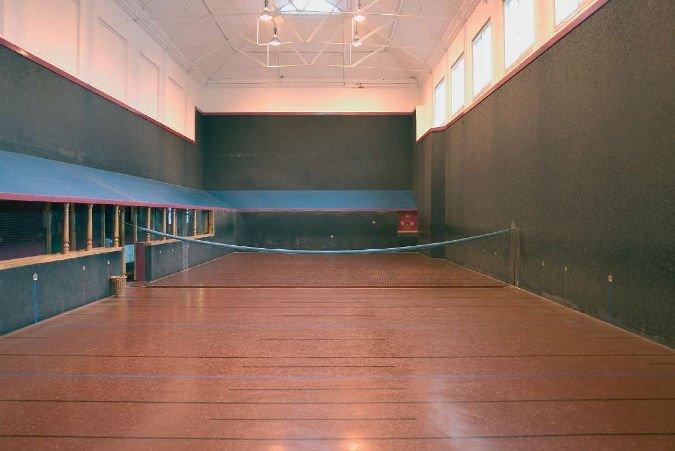 The ball is out if it strikes the side walls above the marked limits or hits one of the rafters or lights. A ball entering the dedans, the grille, or the winning gallery wins a stroke for the striker. However, A ball entering any other opening at the end opposite the striker, or bouncing twice on the floor at the end opposite the striker, records a chase at the mid-point of the opening or at the point of the second bounce, as appropriate. Then there is no change to the score.

If the score is within one point of game or if two chases have been laid, the players change ends (and service) and the chases are played in the order in which they occurred. The player who has not laid the chase has to win the chase by ensuring that the second bounce of his or her return is nearer the back wall than the chase being played.

The unusual feature of real tennis is the chase. A chase is a point held in abeyance and occurs when a ball bounces twice without being struck or enters some of the galleries (but there are three openings wherein the entry of the ball wins the stroke, not a chase). The chase is recorded. For example, a chase better than four means that the second bounce of the ball was nearer than four yards from the back wall. However no stroke is scored.

There are lines on the floor to help measure the chase. If one chase is laid and the score is within one point of game or if two chases have been laid, the players change ends (and service) and the other player has to ensure that the second bounce of his or her return is nearer the back wall than the chase(s) marked. The opponent may leave any ball that seems to fall further from the back wall than the chase marked and so win the point.

The game has the classic elements of warfare where a failed attack is punished by a counter-attack.  The ball can be given spin either by the player or by contact with the wall, and the action of this spin can be even more deadly than Shane Warne! Therefore, reading the spin is an important part of the game. Initially one is totally bewildered by the spin but soon one begins to judge where the ball will move after contact.

Some hand-eye coordination and physical mobility is essential but it does not require the sort of fitness and agility demanded by squash in order to enjoy the game. The game can be enjoyed at many skill levels. A system of handicapping has been devised in order to make games competitive between players of different ability. Age is also no barrier. Many octogenarians play the game, and to a good standard. 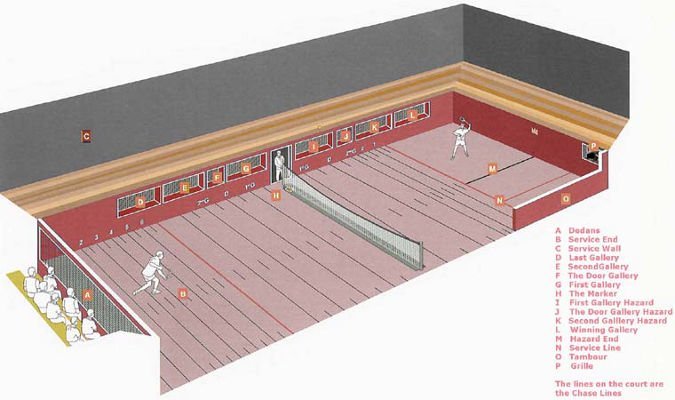 Real Tennis is the king of all racquet sports; a game where subtlety and thought are more prized than brute strength and power.

Using an asymmetrical court, which is divided in tow by the net, the court contains many unusual features. These include sloping roofs, openings (galleries) in the walls and a main wall which has a kink in it (tambour). This tambour allows the ball on hitting the sloping face to move across the court instead of continuing down the line of the main wall.

Since no two courts are exactly alike, playing a new venue can add a further challenge to the game. Differences include the width of the court, angle of the penthouse roof above the corridor and in the width of the tambour.

The game is played with racquets made of wood and with hand-made balls, which are re-covered every week with new cloth.

The racquet is smaller than the one we use for lawn tennis and is features an asymmetric design. The internal dimensions of the head is usually under nine and a half inches (241 mm) in length by seven inches (178 mm) in width. In terms of length,  the racket is a maximum of 27 inches (68 cm).

Each court has at least one professional who is on hand to run the court, provide lessons and organize competitions. The pro is also in charge of  making the balls and re-stringing rackets.

Former Real Tennis World Champion, Howard Angus has a fascinating story which is captured perfectly in an interview with The Sporting Blog.

Where to play Real Tennis

At least 27 courts are believed to be in operating around the UK and since most of them are listed in our directory, it’s easy for to find your nearest Real Tennis Court. Here’s a complete list:

So, if you’re looking for a new challenge, give Real Tennis a go!